why does my cat lick when i scratch his back

Cats are interesting animals that have many unique habits and behaviors. One of the most common and endearing behaviors cats have is licking when they are scratched in certain ways. This behavior is often seen as a sign of affection, contentment, and appreciation from your cat. The act of licking is a natural behavior for cats, as it is a way for them to groom and clean themselves. Cats also use licking as a way to show their owners that they appreciate the attention and care they receive. So why does my cat lick when I scratch his back? Understanding why your cat does this behavior can help you create a stronger bond with your furry friend.

Is My Cat Showing Me Affection When He Licks When I Scratch His Back?

Is It Normal For Cats to Lick When You Scratch Their Backs?

Yes, it is normal for cats to lick when you scratch their backs. This behavior is known as allogrooming, which is a form of mutual grooming between cats and is a sign of affection and social bonding. Cats often lick their fur on their back and sides to clean themselves, and will sometimes lick another cat to groom them. When you scratch your cat’s back, they may lick you in response as a way of thanking you and trying to groom you back. This behavior is perfectly normal and is nothing to worry about.

Is a Cat Licking Me Telling Me Something?

It is possible that a cat may be licking you as a way of telling you something. Cats often lick people as a sign of affection. They may also lick you if they are seeking attention or if they are trying to groom you. Cats may also lick you as a way of showing submission or to mark you as their territory. If your cat is licking you excessively, it may be a sign that they are feeling anxious or stressed. If this is the case, it is important to speak to your vet to determine the cause of the anxiety.

A cat’s licking is a sign of affection and contentment. Scratching a cat’s back is one of the most common ways to show them affection and they will usually respond with a lick. Cats lick as a way of grooming themselves and other cats, and as a way of showing their affection.

When you scratch a cat’s back, it releases endorphins, which are hormones that create a feeling of pleasure and relaxation. This is why cats often purr when they’re being scratched. The combination of the sensation of being scratched and the release of endorphins will often result in a cat licking you as a sign of appreciation.

Cats also lick as a way of marking their territory. When you scratch a cat’s back, you are sending a signal that you are part of their territory and that you belong to them. The licking is a way of the cat expressing their ownership of you.

Finally, cats lick as a way of showing submission. When a cat licks you, it is a sign that they trust and respect you. This is why cats will often lick their owners when they are being petted and scratched.

In summary, when you scratch a cat’s back, they will usually show their appreciation by licking you. This is a sign of affection, marking their territory and submitting to you as the owner.

Scratching a cat’s back is an act of affection that cats enjoy. Cats lick when their backs are scratched because it helps them to feel comforted and secure. Cats are social animals, and like to show affection to their owners and other cats in the same way that they would if they were grooming one another. Licking is also a way for cats to show appreciation for the affection they are receiving, as well as a way to groom themselves. By scratching your cat’s back, you are providing them with a source of comfort and security that they greatly appreciate. 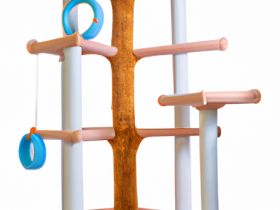 The Best Cat Trees and Climbers for Your Feline Friend 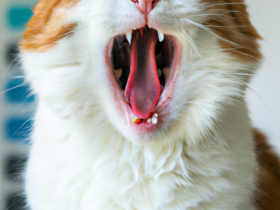 How to Get Your Cat to Stop Meowing Constantly

How to Prevent Your Cat from Scratching Furniture 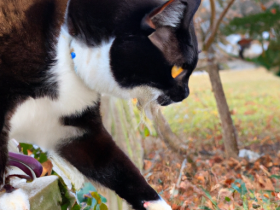 The Pros and Cons of Having an Outdoor Cat